I used the NME 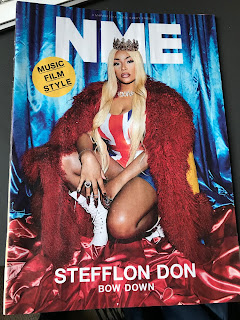 I picked up my last copy of the NME (pictured) at Oxford Street tubestation. Ironic really, as back in the day I used to make a trip to the tube station most tuesdays during my lunchbreak to pick up the NME. One of the best things about moving to London in the 1980s was that you were able to pick up the music papers a day early - invaluable, particularly as this was my main source of gig listings and tour announcements and you could steal a march on less savvy punters armed with this knowledge.

Whilst I had some memorable trips to the shadow of IPC towers to pick up the papers, my usual port of call was outside Tottenham Court Road tube station. It was always a delight that it was not only me getting there early, but sometimes the subject matter of the paper too. More than once Ian MacNab was in the queue in front of me. Memorably you could also pick up a bootleg cassette nearby whilst you were about it too, daringly set up close to the Virgin Megastore and often sold by the late, lamented Liam Maher out of a wooden case which he would fold up and run with at the first sighting of the police.

Of course, the last issue of the NME was terrible. It had been awful and pretty pointless for years but I still would pick a copy up and think wistfully back to the days when it really meant something, not just to me but to a whole swathe of people like me. It was a gateway to a wider world and an acknowledgement that writing about so called low culture did not mean that you resorted to facile comments and lacklustre reviews.  I remember showing my dad one of the reviews once, I think it was an review of Joy Division's Closer but I would need to do a bit more detective work to ascertain this for sure,  but I recall being staggered by the quality of the writing, the depth of the analysis and an awareness of context that I had not been subject to up to that point via my English literature lessons. Not sure it persuaded my dad to listen to Atrocity Exhibition though.

I recall being terrified that i would miss an issue containing a free 7 EP  and making a special trip to Leeds Railway station when other stockists had all sold out. I remember happy days at Doggets on the Southbank with Christmas bumper issues of all of the music papers trawling through over a beer or two with my partner in crime. But more than anything I remember the excitement,
and anticipation of my trips to buy it and the joy of reading it. RIP
Posted by Guy Osborn at 10:06