The Art of the Olympics and the Cultural Olympiad: Bell ringers of the world, unite and take over

Whilst technically spread over four years, and starting with the end of one edition of the Games and finishing at the closing ceremony of the next, this week has seen something of a relaunch of the  Cultural Olympiad for London 2012 and the London 2012 Festival programme. Perhaps the most eye catching, or ear splitting, highlight of which is Martin Creed's Work No 1197 which has campanologists of the world polishing their bells in excited expectation. 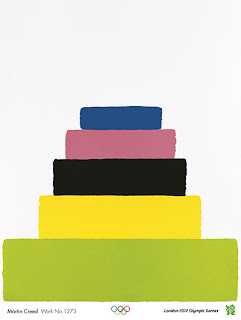 As part of this, a number of high profile artists have designed posters in celebration of the event, the seemingly omnipresent Martin Creed amongst them, and his effort is reproduced above. A slide show of them all, including efforts from Gary Hume, Rachel Whiteread, Bridget Riley and Howard Hodgkin, can be viewed here. Its fair to say that these have come in for some criticism, some of the Daily Mail ultra reactionary variety (see Louise Eccles' A splodge of blue paint and coffee cup rings...Infant school art? No, posters for the London Olympics)  but a lot of the criticism seems to have picked up on the lack of an overt  identity linking it with the place the event is taking place. Certainly there are a number of previous examples that have made this link more explicit, see for example one of the posters for the 1948 Games that plays on some, frankly pretty obvious, London iconography. 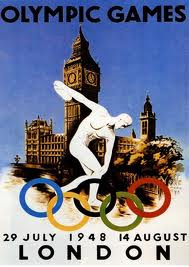 Perhaps some of the Daily Mail readers were a bit perturbed that there weren't enough bowler hats, London taxis and red telephone boxes on the posters, but I liked them. At least they were not safe and cliched, and did celebrate some great contemporary British artists. It did however get me thinking about art and sport more generally, and also about cultural aspects of the Olympics. First anyone who has been on a tour at Camp Nou will have seen the art gallery, much of it inspired by a competition that is run by FC Barcelona (mes que un club) and the famous Miro poster. 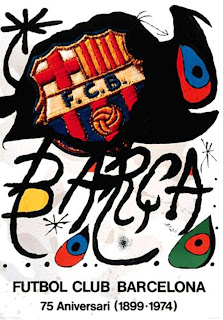 This is a famous example, but I am sure there are others. In the meantime, all of the posters for the 2012 Olympics and Paralympics are not only available as poster prints at the reasonable price of £7 (all good stockists etc - but can only be bought with a VISA card on London 2012 site, but that's another story)  but also high end signed art prints of these have been made available from the admirable (I have bought some work from them in the past, but not London 2012 work) countereditions although these will be beyond many people's price range with the box set currently set at £11,000 but unavailable and Bridget Riley's piece already sold out.
Posted by Guy Osborn at 02:35 No comments:

Now on twitter! Am working out way to embed this in site too.