I offer up to you this tribute: Billy Bragg and my dad

My dad died in 2000. I've blogged about him before, particularly around the great work of the Stroke Association who provided my dad with great support after his first stroke, and also after I met Edwyn Collins shortly after his own stroke. It's Fathers' Day today. I think about my dad all the time, but particularly on day's like these. I've taken to posting a link to Billy Bragg's Tank Park Salute every year - its become a sort of small, personal act of remembrance. Its a wonderful song, and makes me quite emotional just thinking about it. An excerpt from the lyrics appears below, and a video of Billy performing this appears in the link above.

'You were so tall
How could you fall?
Some photographs of a summer's day
A little boy's lifetime away
Is all I've left of everything we've done
Like a pale moon in a sunny sky
Death gazes down as I pass by
To remind me that I'm but my father's son
I offer up to you
This tribute
I offer up to you
This tank park salute'
(from Billy Bragg: Tank Park Salute)

I've met Billy a few times, and he has always been kind and generous. Billy Bragg concerts have been a bit of a constant throughout my adult life - perhaps I will at some point write a piece for my Tickets of Distinction (my other blog, celebrating some of the gigs I have been to over the years) blog about one or two of these, but here I want to concentrate on one meeting, in 2010, at Latitude Festival. Tank Park Salute is of course a tribute to Billy's late father, Dennis. I met Billy by chance outside the poetry tent, and in the course of our conversation I told him about what the song meant to me. Billy was brilliant, and asked me for a hug. In the photo below, pre-hug, Noah, my son, is also telling Billy about how I picked up one of his plectrums at a Red Wedge gig. 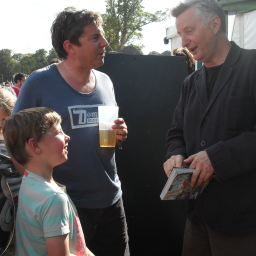 Billy only went up in my estimation that day, and I still remain in awe of his songwriting - Tank Park Salute is a wonderful tribute to his father and a lovely touchstone for lots of us, including this heartbreaking story from Neil Hughes's blog about his daughter. A couple of years ago I met the poet Mike Garry, eager readers may remember some of my previous posts about him.

Mike had written a poem as a tribute to his mum, entitled What me mam taught me, which I thought was beautiful. Mike is a firm believer in the power of the word and that we all have poetry in us. we talked a lot about our fathers, both had had strokes, and Mike encouraged me to write a poem about my dad. I've written fragments but its not finished but maybe next year for fathers day I'll publish it. In the meantime, for my lovely dad, I offer up to you, this tribute. x

I remember seeing this emblazoned on posters around London during EURO '96, and on the eve of EURO 2016 our thoughts turn to not thirty years of hurt, but now 50 years since our last major footballing success. Outside of the triumph at Wembley, 1966 was an important year for all sorts of other reasons. I'm currently reading Jon Savage's book 1966. I am a great admirer of Savage's work, England's Dreaming for example is by far the best account of punk that has been written and Savage's contextual awareness in all his work, Teenage being another fine example, is astounding. Savage describes 1966 as 'the year that the decade exploded', and the first chapter begins;

'1966 was a year of noise and tumult, of brightly coloured patterns clashing with black and white politics, of furious forward motion and an outraged, awakening reaction. There was a sense that anything was possible to those who dared, a willingness to strive toward toward the seemingly unattainable. There remains an overwhelming urgency that marks the music and movies of that year, counterbalanced by traces of loss, disconnection and deep melancholy'.

I can't vouch for the whole book yet - I have been striving to read the book (which is divided into months) in such a way as to get a sense of the year in real time, 50 years on, so am only up to June, but what the book has illustrated so far is that 1966 is significant on many fronts. At the Centre for Law, Society and Popular Culture we are currently considering using 1966 as our theme for Centre events for the next academic year. We have previously used themes for our Film Matters series, and thought that 1966 might work as the motif for a series of events given its significance. 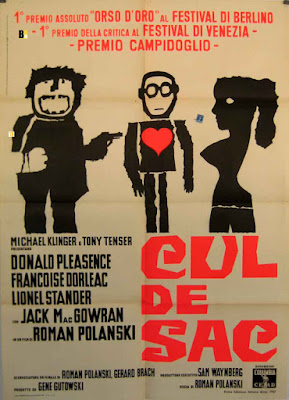 In terms of the cinema, Roman Polanski's Cul De Sac received its world premiere at our Cinema in 1966 and we are hoping to show that. Other key films released that year included Blow Up, The Battle of Algiers and Au Hasard Balthazar all of which are currently being considered for screenings. Outside of the cinema but still within visual media we have already pencilled in a screening of Cathy Come Home, introduced by Professor Peter Robson (former Chair of Shelter) and chaired by Dr Russell Orr to mark the 50th anniversary of its BBC debut.
Musically, key albums released in 1966 include The Beatles' Revolver, The Beach Boys Pet Sounds, and Dylan's Blonde on Blonde (Centre Member Ken Foster was even at the infamous 'Judas' Dylan concert at the  Manchester Free Trade Hall!). We have previously run Vinyl and Wine events at the Centre where members of the Centre take it in turns to play an album of their choice and might refine this concept for those three albums above. Interestingly there is a far more eclectic soundtrack provided by Jon Savage to accompany the book, the Ace Records' spotify playlist of which is available here.

Other events are being considered too, perhaps including some celebration of the important House of Lords Practice statement on Judicial Precedent, or even recognising 12 July as the date Tony Macaulay signed his publishing contract that ultimately led to the case of Schroeder v Macaulay. On as more macabre note, 1966 was also the year of the the sentencing of Myra Hindley and Ian Brady (The Moors Murders), and Harry Roberts (The Shepherds Bush Murders), both of which have featured heavily in popular culture.  Any more suggestions and ideas welcome, and keep an eye on the Centre website for news on developments.
Posted by Guy Osborn at 06:17 No comments: