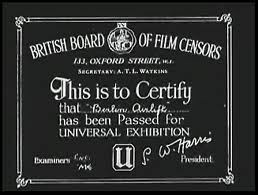 It may not be common knowledge, but the British Board of Film Classification celebrates its centenary in 2012, see this useful piece by Andrew Pulver in the Guardian recently.   Recently, along with my colleague Alexander Sinclair, I have been working with the BBFC on a book project that celebrates this centenary. Our chapter broadly covers the years 1975 to 1982. These were exciting years, and our chapter covers the extension to the Obscene Publications Act and the passing of the Protection of Children Act, along with the release of important films such as Salo, The Life of Brian, Taxi Driver and Pretty Baby.
The book is due out in November 2012, but those of you who have read the blog previously will have seen a series of pieces about the history of our own Cinema at the University and the campaign to revive the birthplace of British cinema, see earlier posts such as this.  Drawing upon these links, we are hoping to run some joint events between the University of Westminster and the BBFC in 2012. More details to follow as I have them.

Finally, apologies for the pun in title, but it does give me a chance to make reference to my beloved XTC, and happy new year to all.
Posted by Guy Osborn at 07:36 No comments: