Is it a kind of dream? 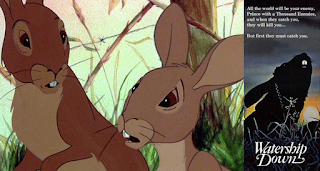 With the Easter weekend coming up, I started to think about possible trips to the cinema with my family. The Hunger Games looms large for my 10 year old, and although I have heard reports of children being scared of its dystopian vision, I figured he got enough of this at home and should be OK. That said, it reminded me of the useful guidance the BBFC produce and in particular the 7 seconds of cuts that were made to the film in order to obtain  a 12A certificate. I will report back on the film once I have seen it, but it made me think that I should publicise some of the excellent work the BBFC do. I met a colleague from the BBFC recently, Jen Evans, with whom I am working on an exhibition project that hopefully will take place in June of this year, to mark in part the centenary of the BBFC. She reminded me of their excellent on line 'From the Archives' series which gives a number of valuable insights into the history of the Board. Last month focused on some fantastic background to the film 'What Ever Happened to Baby Jane?'. Especially interesting is the BBFC Exception Form, below and via this link, detailing some key cuts that needed to be made in order for the film to be given an X certificate, and including one in particular that Warner Brothers baulked at, the removal from one scene of a dead rat being served. 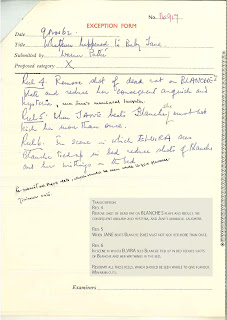 In the letter from Warner Brothers to John Trevelyan, then Director of the BBFC, they successfully plead for the rat's reinstatement! Fantastic archive material, and mirrored in this month's topical offering of Watership Down, hence the image to kick off this blog entry. Now I remember this from my first year at secondary school, wondering which of the class would be lucky enough to say 'piss off' as we read it out loud in class. I saw the film around the same time, aged 10 or 11, and was not unduly perturbed by it. However, I was very interested to discover that the film is still contentious to this day, and that the BBFC still gets letters complaining about its certification as a U. The BBFC have helpfully made available the original examiners' report of how they came to their decision, noted in this month's 'From the Archives'. Brilliant stuff, and testament to all the work the BBFC do in terms of education, outside of their role as classifiers of material. I will post about this again soon as the exhibition draws near.
Posted by Guy Osborn at 10:39 4 comments: