Well, its come to that terrible time when the Group stages finish and the unthinkable happens - a day without football. Luckily I still have my World Cup cooking concoctions to think about though so all is not lost. The knock out stages present a whole new host of issues for my diet, as I intend, as far as possible, to theme the meals based not only on the games themselves, but also eliminate foods from countries that have been previously represented in my own culinary stakes. So Saturday's games present me with some unique problems.

On Saturday we have Brazil v Chile and Columbia v Uruguay. Now I have already cooked Brazilian and Uruguayan so eliminating these its looking like some sort of Colombian/Chile mash up is in order. For Sunday, we have Holland v Mexico and Costa Rica v Greece, now I didn't blog the recipes but I have already cooked Greek and Mexican, but luckily my mooted Spanish/Dutch fusion for the group game did not materialise as I settled for straight tapas so I have freed up Costa Rica and Holland for our Sunday lunch. I'll report back on these later, but for now, here's what I cooked  for the Germany v Ghana game:

This classic Ghanian recipe was adapted from the Guardian Weekend Jamie Oliver recipes where he gave some World Cup ideas. Obviously I'm vegetarian so chicken thighs were out, and given  that Germany were the opponents, and cognisant of their love of a sausage, a selection of vegetarian sausages were utilised. I would personally recommend the Quorn Best Of range - delicious. Unfortunately I forgot to take a picture.

1) Roast cherry tomatoes with some olive oil until they begin to collapse
2) Fry onions, garlic, paprika, coriander and chilli in rapeseed oil until soft
3) Add tomato puree, chopped tomatoes and stock, bring to boil
4) Add rice, and simmer with lid on for 15/20 minutes or so, stirring occasionally and adding water if necessary
5) Stir in parsley, cherry tomatoes and mix well. Serve with the sausages and some lemon wedges

If you try it I hope you enjoy, and if you feel the urge perhaps dedicate it to Sulley Muntari and Kevin-Prince Boateng. If anyone is interested in my other blog, I blogged yesterday on what was for me the 25th anniversary of my following the Stone Roses around the country,  but for now, its back to the day job.
Posted by Guy Osborn at 06:06 No comments:

Over a week into World Cup 2014, generally the football has been great although the food I have been preparing has been preferable to the English and Spanish performances (spirited first half against Italy notwithstanding), and since the success of my opening night Feijoada, I have embraced my World Cup culinary journey with varying degrees of success. This has involved some fairly traditional fare, such as Spanish and Italian variations which I often cook, but where possible my food boundaries have been transgressed. Sunday's games, for example, allowed me to expand my repertoire not once, but twice. Honduras's game with France inspired me to a lunchtime Honduran Salad, and the later Argentina vs Bosnia game, an Argentinian lentil stew.

Method:
1 Steam sweet potatoes for 5 minutes, drain until dry
2 Fry sweet potato in oil for 15 minutes, shaking occasionally, until crisp and remove and drain
3 Mix lime juice, balsamic, garlic mustard and salt and pepper. Whisk in yoghurt and milk
4 Steam greens, place in bowl with cheese and toss with dressing
5 Top with sweet potatoes and serve 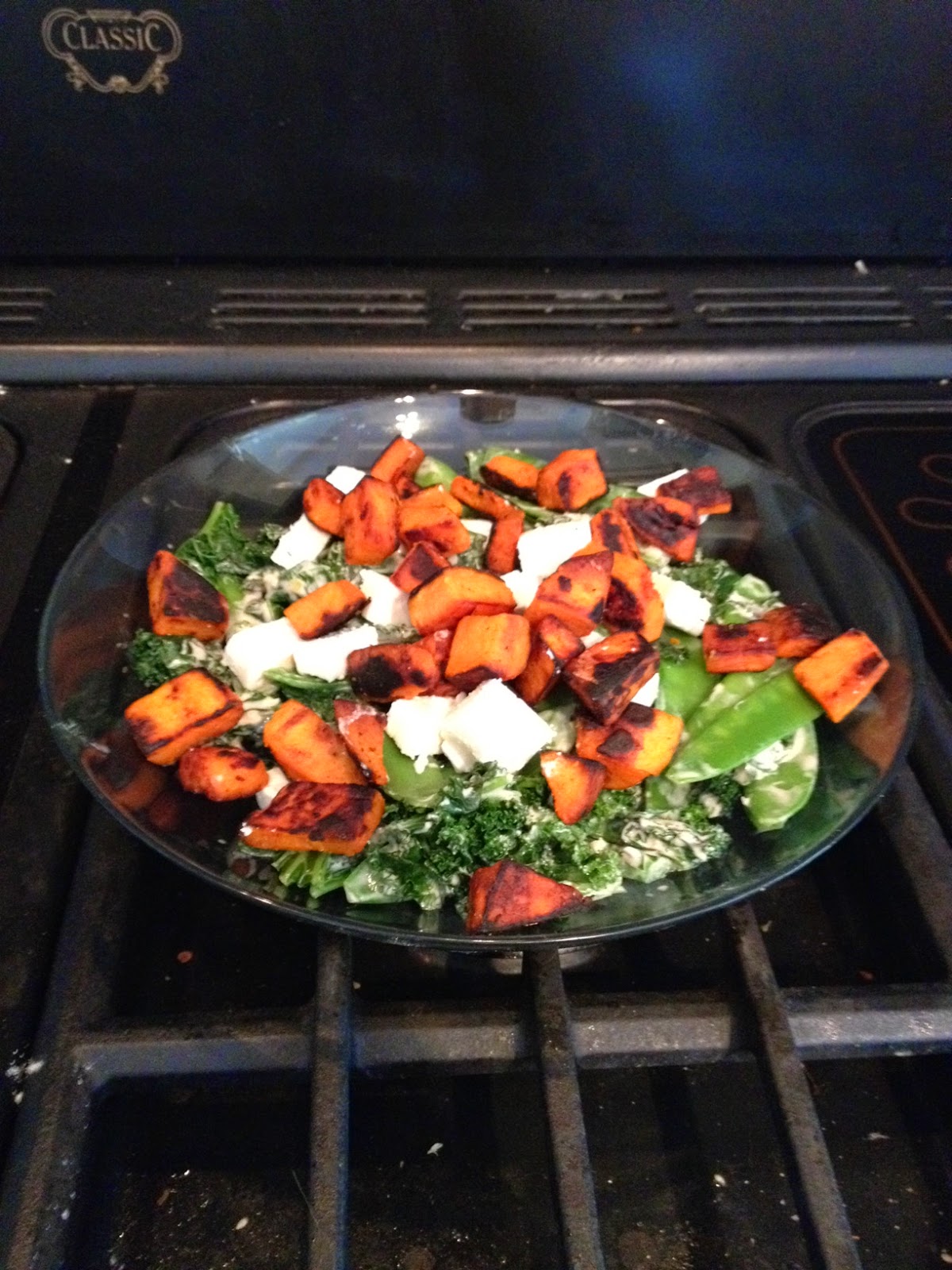 The Argentinian lentil stew was pleasant if not earth shattering, with some interesting use of apple, but I will not trouble you with the recipe here unless public demand necessitates this. Monday was due to be a Portuguese soup, but legume fatigue was getting to me so a decision was made to defer the Portuguese offering until the second group game at the weekend, and a late substitution of German sausages and mustard was made. This was the equivalent of taking off Raheem Sterling and bringing on James Milner, but needs must in the white heat of the World cup cooking cauldron.

Tuesday and Wednesday presented me with my first logistical difficulties. On Tuesday I was already booked to go and see the Amazing Snakeheads at the Meltdown Festival with my dear friends the Spice Monkey and Alex 'U2' Sinclair. Notwithstanding the change of personnel, which sounds like an intriguing story in itself, the band were great as they always are, but as I was not at home no World Cup dish was created. Similarly Hertford U12 cricket on Wednesday meant there was no time for a football delight that night either so my efforts of theming every meal were looking over ambitious.

It would have been easy on Thursday to take on embrace the best that  English cuisine has to offer, but given my conservatism on monday a Greek/Uruguayan combination was preferred. The Greek part of this was the sort of thing I often cook anyway - Halloumi kebabs and a Greek salad. Of course, I was careful to ensure that olives were kalamata and I tweaked a BBC Good food baste recipe for a baste, but these were fairly standard dishes. It took me a little longer to find the Uruguayan complement, but I eventually found  the recipe for an excellent Uruguayan Bean Salad, adapted from something i found on myrecipes.

Ingredients:
1 tin kidney beans (I had no time to boil up from dried, if i had i would have added some more)
2 skinned and seeded ripe tomatoes, chopped
1 red onion, finely chopped
3 tbsp, red wine vinegar
handful chopped flatleaf parsley
1tbsp olive oil
1tsp paprika

Combine all ingredients, season with salt and black pepper and serve

I didn't take a picture at the time, but luckily as I am eating leftovers for lunch today you can see it here. 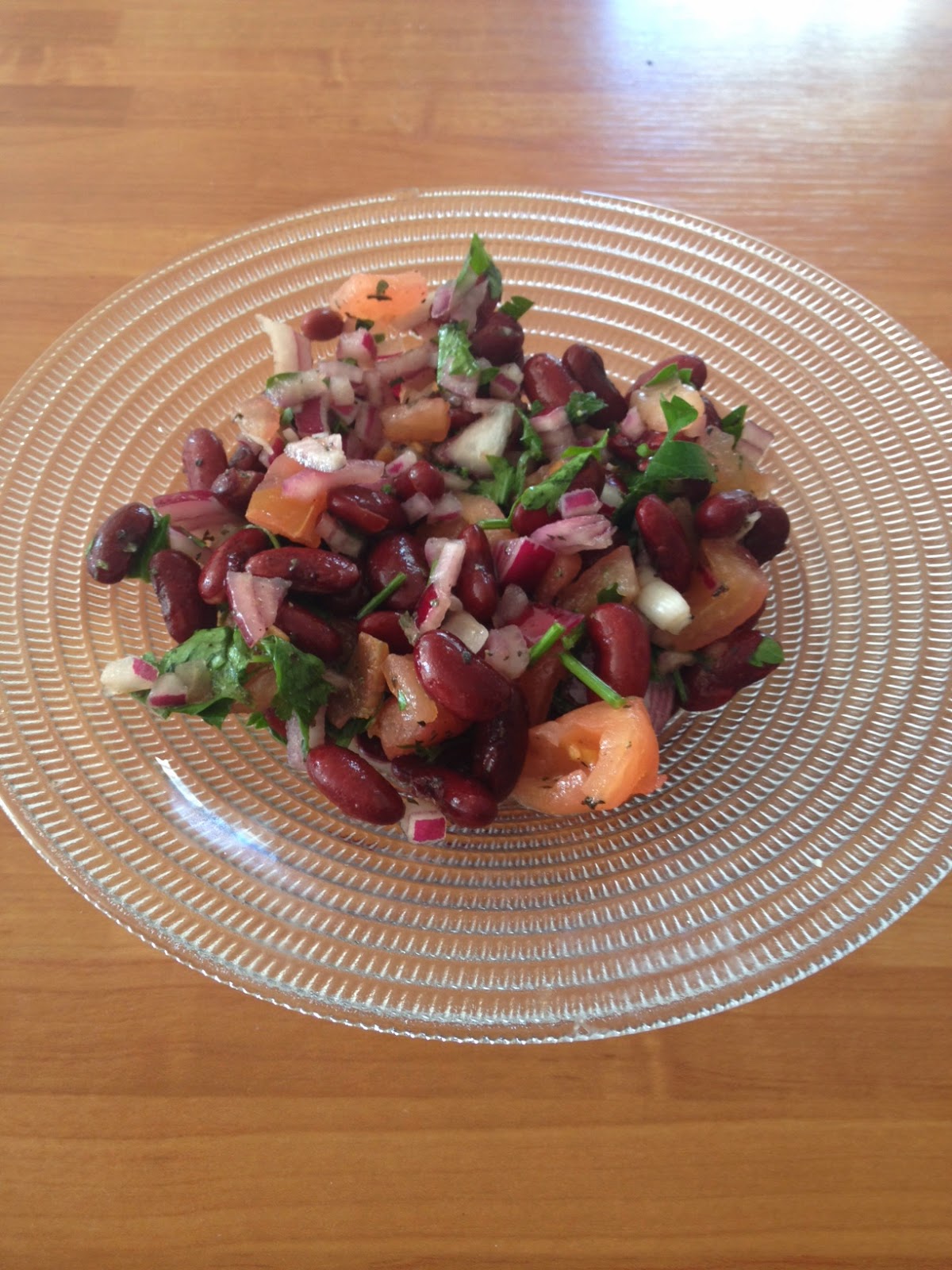 On Friday with the rest of the house living it up elsewhere, and to capture the national mood encapsulated by Gary Lineker's Italian shirt  we booked to go out for some Italian food, by then of course Costa Rica had already pulled off a fine victory, but at least the food was good. The week ahead promises the long awaited Portuguese soup and a Ghanian/German fusion amongst others.

Normal service will soon return to this blog, and look out for a Stone Roses flavoured Tickets of Distinction later in the week, but bear with me for now as I try and eat my way through the World Cup.
Posted by Guy Osborn at 05:57 No comments:

In something of a departure for the blog, but to satisfy my, ahem, many followers on twitter, I intend for the next month to occasionally post detailing my World Cup 2014 Food Odyssey. For previous tournaments I have attempted to tie in a themed meal with the various games during the tournament, with a mixed domestic culinary reception if I am honest. With the wall chart up, and with my first article about WC 2014 published in The Justice Gap yesterday, I posted a tweet of my proposed pre Opening match meal. My intention is that this would be the first in an attempt to theme a meal for every day a match takes place throughout World Cup 2014. It's a journey that hopes to take in Bosnia, Iran, South Korea, the Ivory Coast and others, and is sure to cause me some culinary nightmares and food provenance issues. Of course this is compounded by the fact that I am also a vegetarian to add a further dietary complication into the mix.  Never one to shirk a challenge, the first match, pitching hosts Brazil against the wily Croatia, proved fairly easy to deal with. Whilst some fusion cooking will take place on certain days, especially during the group stages where up to four games are taking place offering me any number of permutations, my opening gambit was for an adaptation of one of the classic Brazilian dishes, Feijoada, and the recipe appears below.

Ingredients
2 tins of black beans (of course I am one of those lentil-loving sandal-wearing types, so I boiled some up the previous day myself - feel free to do this if you can think of nothing better to do)
1 onion chopped
1 tin tomatoes
1 yellow, 1 red pepper
1/2 medium butternut squash
50g chipotle paste (use any chipotle based sauce or seasoning to add the flavour)
3 crushed garlic cloves and some garlic paste (adapt as you wish)
Assorted herbs (see what you have, but thyme is good, maybe some coriander although perhaps less authentic)

1) Fry onions, peppers, tomato and garlic in small amount of oil until starting to soften
2) Add beans, squash, and around a tomato tin full of either cooking liquid if you are one of nature's bean boilers like myself, or some stock if not. Cook for around 30 minutes, stir occasionally
3) Add salt, and herbs to taste, cook for 5 minutes more
4) If like me you like it hot, look in fridge or cupboard for whatever your sauce of choice is. I like chilli puree or maybe Nandos extra hot. Note instruction 4) is not in the least bit authentic
5) Serve with some rice. I went short grain brown, but hey, I'm not going to tell you how or what to cook in the rice stakes.

I have to say I thought it was excellent, and in fact had some for my lunch today too. My thoughts have now turned to this evening, and I'm focussing upon the Spain Holland game and it may be my first attempt at fusion cooking.  My caipirinha requirements for this evening have been slightly stymied by a lack of cachaca in local outlets, although I am being contacted as soon as it arrives with my local man tomorrow lunchtime. If you are looking for drinks to have with this, or indeed drinks for any occasion, you could start by taking a look at the perhaps slightly tenuous, and dare i say bandwagon jumping collection put together by Worth Brothers - the Paul McGrath of wine merchants. Their wines are reliably excellent and great value, and you should also read the excellent column in tomorrow's Derby Telegraph by Tim, one of the Worth Brothers, entitled  Drinking outside the box.

Who knows where this will end, my own television programme or perhaps a best selling cookbook, but for now, back to planning tonight's menu.
Posted by Guy Osborn at 07:55 No comments: