During lockdown the Estates Team has been working really hard in Little Titchfield Street, the home of the Westminster Law School and the library, and everyone will spot some great improvements when we are all back in the Building. One of the things the team have been working on is the Café area, this has been rejuvenated, see some teaser photos below, and this will be a great place to relax and meet. 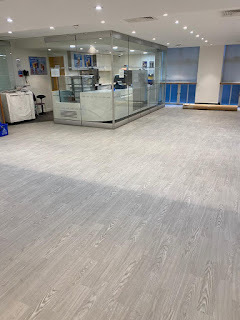 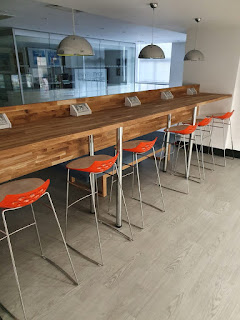 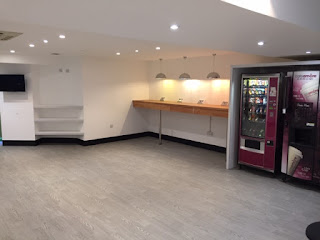 One of the things it does need however is a name. Below are three possible names for the area and we would love to hear what you think. PLEASE VOTE ON OUR (ADVISORY) TWITTER POLL, link here, or if you have other ideas tweet these too!

1 THE GREEN ROOM. Many people know that the main lecture theatre was a famous venue hosting bands such as The Who, Fleetwood Mac and Jimi Hendrix In the 1960s and 1970s. What perhaps they don’t know is that the Cafe was then the Backstage Area/Green Room for the artists. This name would pay homage to that history.

2 LAW AND ORDER – its in the Law School, and you place orders for food and drink – simple eh?

3 THE MARY LINES CAFÉ Some of you may have spotted that 2021 marks the centenary of our athletes competing in the first Womens’ Olympiad in Monte Carlo. Mary Lines was the star of these games and represented the University, this name would recognise and acknowledge the women of the University, and tie into a brilliant project that is running at the University, see here.

Mary Lines, the University of Westminster and the curious case of the third plinth

March 21st 2021 marks the centenary of our Polytechnic (now University of Westminster) women departing for France to participate in the first Women's Olympiad. To mark this we are running a project, entitled Writing Between the Lines, which involves ten student poets celebrating the stories and achievements of these fantastic women. These interventions will be performed, displayed and published, and will begin to rectify an absence of acknowledging women in our sporting history which up to now has not been fully visible. The project begins by celebrating these ten women athletes but aims to develop to embrace the crucial importance of women to the University more generally. Symbolically the beginning of the project is marked by us celebrating one specific member of these ten athletes, Mary Lines, the first star of womens' athletics after the first world war.

We note an absence above, but in the grand foyer of 309 Regent Street (above), the Headquarters of the University of Westminster, there is another absence. If we look at the board of the Studd Trophy an impressive list of Polytechnic Harriers can be seen, but no women are listed. At the same time, we have an important place in London's Olympic history, but women were in fact largely occluded from the Olympics until 1928.  Our foyer is a beautiful space but there is a further specific absence. If you look carefully in the room there are three plinths, on two on the 'Gallery' side you will see busts, of Hogg and Studd, very important figures in our history.

Above the entrance to the cinema on the other side there is a third plinth, but this has been empty for years, see the photograph at the top of this blog. Drawing on the concept of the fourth plinth in Trafalgar Square we mark the centenary of the 1921 successes of our Polytechnic women at the Womens' Olympiad by recognising Mary Lines, on behalf of all Polytechnic women, on the third plinth in the Regent Street foyer. This will be lit on 21 March 2021 to mark the centenary of the departure from Victoria station and remain lit for the period of the competition and until the centenary of their return. 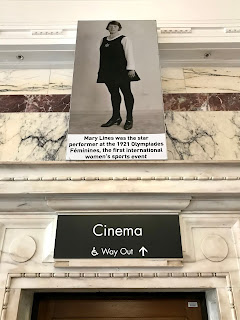