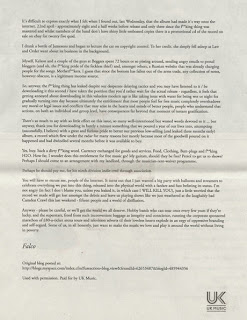 You may have seen this advert in the Guardian on 28th September. Its an interesting change of approach for the music industry who have previously tried using various tactics and techniques to deal with the issue of file sharing.  This has included threatening end users and internet providers, and bleating loudly to anyone who will listen. It is particularly interesting for readers of blogs, as the full page advert paid for by UK Music is actually a reproduction of a blog posting by the lead singer of the indie band Future of the Left earlier in the year. The advert has created a lot of discussion, not least on the excellent Guardian musicblog, and is a further reminder that the music industry is trying desperately to deal with the issues created by technology, and failing to properly embrace them.
Posted by Guy Osborn at 08:15 3 comments:

I have blogged about Edwyn before, but just been alerted by my good friend Richard to what looked like a fantastic night in Glasgow recently, with Edwyn playing with Teenage Fanclub, and some clips from the gig are available here. It looked like a top night out. Its great to see that Edwyn is going from strength to strength, his wife Grace also published a book recently Falling and Laughing: The Restoration of Edwyn Collins which is well worth a read.
Posted by Guy Osborn at 04:38 1 comment:

In 2004, the CPS examined whether Beenie Man could be prosecuted over a series of lyrics that allegedly incited the murder of gay men. At the time there was no offence of inciting homophobic hatred. In March 2008 Stonewall commissioned a survey of experiences and fear of homophobic crime in Britain, the results of which were published in Homophobic Hate Crime: The Gay British Crime Survey 2008 . One of the recommendations was that police should investigate all such crimes reported to them, and where relevant to explain the reasons why a decision  to prosecute was not taken. The Criminal Justice and Immigration Act 2008 s74 now provides for an extension of hate crime to cover hatred on grounds of sexual orientation, although this is not yet fully in force. This year, the Coroners and Justice Bill was introduced in the House of Commons and the Report stage for this is due to take place on 21st October 2009. Contained in this Bill is Clause 58, now Clause 61, which deals with hatred against persons on grounds of sexual orientation and provides that:  ‘In Part 3A of the Public Order Act 1986 (c. 64)(hatred against persons on grounds of sexual orientation etc), omit section 29JA (protection for discussion or criticism of sexual conduct etc)’. Section 29JA of the Public Order Act 1986 provides that: ‘For the purposes of the offence of stirring up hatred on the grounds of sexual orientation, discussion or criticism of sexual conduct or practices or urging persons to refrain from or modify such conduct is not, in itself, to be taken to be threatening or intended to stir up hatred.’ This proposed modification has been subject to criticism from various religious groups, this one from Network Farnham being fairly representative.
It will be interesting to see where this all leads, and in what form the legislation here finally appears, but its interesting to think about its application to instances including some of the chanting directed at Sol Campbell for which a number of people were found guilty and recent disquiet over chants directed at Arsene Wenger, resulting in the removal from Amazon of CDs containing these chants.

The Light that Pours Out of Me

The mention of The Smiths in my previous post reminded me, in an oblique way, of a fantastic gig that I went to last week. Morrissey and Radiohead have both been known to cover songs by this seminal post punk band, and the gig itself was superb - really showing that not only can bands reforming (sometimes) be a good idea, but also that some music really stands the test of time and that music made thirty years ago can still be relevant, important and modern. The band, of course, were Magazine. A clip from the gig, supplied by my dear friend Bob the Chiropodist, can be found here.
Posted by Guy Osborn at 05:33 2 comments: 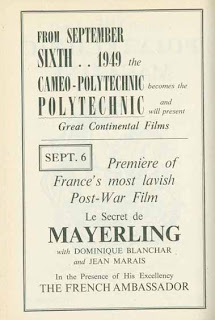 Sixty years ago this week this film was premiered in the Old Cinema at what is now the University of Westminster. I have written previously of some of the distinguished film history of the University, and further details are available via the Compton Club.
The advert opposite is from the University magazine of the time, and notes that the French Ambassador was in attendance. The film itself was written and directed by Jean Delannoy, and is based on the Mayerling incident from 1889, and the murder/suicide of Crown Prince Rudolf of Austria. The film starred Jean Marais, someone who first came to my attention as the cover star of The Smiths 'This Charming Man', the cover of which is reproduced below. I have been considering for a while the possibility of screening some of these historic films that have been premiered at the University to illustrate the unique and important history of our cinema. In terms of a screening, the problem with 'Le Secret de Mayerling' is not so much that it is in French, but rather that there are no English subtitles! However, it may be that we perhaps show Terence Young's 1968 film Mayerling, starring Omar Sharif, and based on the same incident, as a celebration of this event. Please keep an eye on the Compton Club website for details of this, and future, screenings. 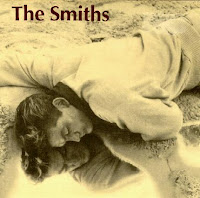