This week I have been pre-occupied by bees. On Wednesday I went to a mesmeric live performance of Be: One at Sonos Studios in Shoreditch. This is part of a Wolfgang Buttress project  which seems to have developed far beyond what he even imagined at its inception - indeed at the Q&A that preceded the performance he seemed barely able to comprehend that a project he started with bee expert Dr Martin Bencsik of Nottingham Trent University has led to a booking at Glastonbury  this year and culminates (or maybe it will develop even further, who knows!) with an installation of The Hive at Kew Gardens this summer.
The performance itself was magnificent - I bought the album earlier in the year via the brilliant crew at Caught by the River (CBTR) website and the album can be purchased via that link. CBTR was formed by Heavenly's Jeff Barrett and his friends, and to me the man is a touchstone for quality and has barely put a foot wrong over a distinguished career  - Be One is no exception. The album is a beauty, an intensely moving and immersive attempt to harness 40,000 bees, with their very specific communication modes including their 'begging signals', 'tooting' and 'quacking'. Their sound is amplified and complemented by some superb musicians including members of Spiritualised in what Buttress calls 'a dialogue between bee and human'.
Coincidentally, on a research visit to South Africa last year, along with my colleague Steve Greenfield, I was taken to a hive outside Potchefstroom near Johannesburg. Again this was a fascinating experience, and the rituals surrounding beekeeping, and the sound of the bees  as we opened the hive, was amazing. This got me thinking about keeping bees myself, and I couldn't fail to notice the higher levels of bee awareness that were emerging, see the work of the Honey Club for example. Some more research revealed that bees had been introduced to Regent Street for the first time by the Crown Estates in 2009 and this got me thinking about my University, the University of Westminster and perhaps one of the crown jewels of Regent Street, and bees.
As an urban Polytechnic, it appears we have never taught classes on beekeeping. This perhaps  is one of the few practically oriented courses we have not taught, as a view of our history would indicate. Those wishing to delve more deeply into this should look no further than the excellent series of publications published as part of the University History Project. Only this week our esteemable archivists tweeted that Vidal Sassoon studied hairdressing at our predecessor, the Regent Street Polytechnic.  We have apparently experimented with keeping bees at the University, but sadly it appears our efforts up at our Chiswick Sports Ground were met with vandalism and, so far, despite some interest in placing hives on flat roofs and spaces at our various buildings in the West End and beyond, we have had little success. I'm hoping that we can further explore the possibility of using the otherwise overlooked rooftop at Westminster Law School for this and will report back if this comes to fruition. One of my favourite photos of the Law School actually involves students pictured on the roof performing gymnastics, sometime around 1929, an activity now precluded by health and safety considerations, see below. 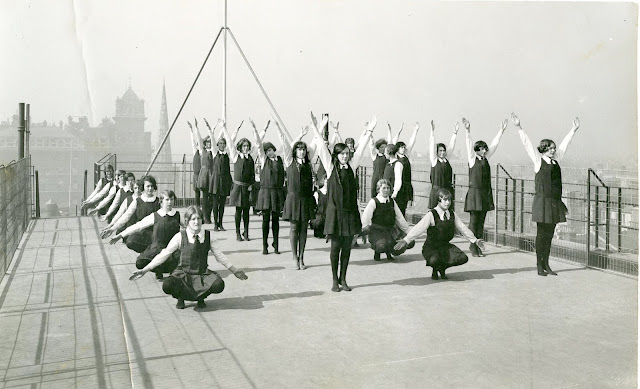 For now though, whilst this has got me thinking about bees in song and bees in popular culture (the more 1980s popular music literate will have picked up on the reference in the title to this blog) I'll sign off with an excerpt from an earlier performance of Be: One, a link to the whole album on spotify,spotify:artist:06kHjoBIuDUNyFBNBMoAC2 and, with a sense of circularity, the video for Just Like Honey.