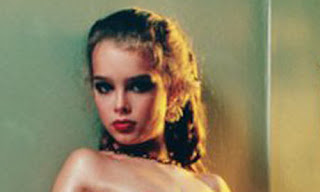 The Tate Modern's new exhibition, Pop Life, looks to already have created a furore. I have not visited it myself yet, having preferred to take the short walk from work to the Royal Academy to see the superb Anish Kapoor exhibition, but will report back once I have done in the next few weeks.  On 1 October, the day the exhibition was due to open to the public, the Guardian reported  that the Tate had pulled one particular exhibit, Richard Prince's Spiritual America.  His piece contains an image of the 10 year old Brooke Shields, authorised by her mother and originally taken by the photographer Gary Gross in 1976 for the Playboy publication, Sugar and Spice. A cropped version of this image appears above. The photo was subsequently used by Richard Prince as the basis for his own piece. Initially, he put the photo in a gilt frame and displayed it, without any label, in a shopfront in a part of run down New York. Apparently there was very little complaint when it has been  shown previously, including recently in the US as part of a Richard Prince Retrospective at the Guggenheim. For the Tate installation of Spiritual America, the photo hung, in  its tacky frame, on its own inside what Adrian Searle called a 'dark red and womb like' room. However, the gallery was visited by the Metropolitan Police and the display has been, to use the words of the Tate, 'temporarily closed down' and the catalogue withdrawn from sale. I have blogged before about the regulation of art, and indeed discussed a visit to the exhibition Seduced last year with my LLM students. This case also appears to have echoes of previous problems galleries have had involving the use of images of children, involving Robert Mapplethorpe and Tierney Gearon amongst others. No doubt time well tell what will become of this particular exhibit, and a view of the comments via the Guardian website shows that the area is one that provokes strong emotions, but a moot point is whether we feel the police should be regulating art, and how the law operates in this area? This question is one that will run and run.
Posted by Guy Osborn at 07:43 1 comment: