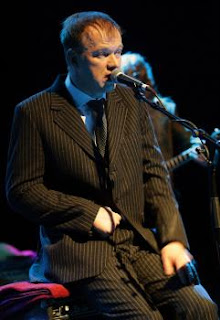 On Tuesday night I went to see Edwyn Collins at the Shepherds Bush Empire. It was wonderful and heartbreaking in equal measure. I saw him on his own in the corridor beforehand and mumbled hello to him but it was very unnerving - he reminded me so much of my dad. My dad had a stroke when I was 15, almost exactly the same time that I was Postcard Records mad, writing to Edwyn, then lead singer of Orange Juice and Alan Horne, the owner of the label, see the sound of young scotland blog for more images of the early 1980s Scottish scene and more. The feeling was very weird for me as Edwyn was as close as I got to heroes at that age (this was post Trevor Francis infatuation) and seeing someone like this going through what I had seen my dad go through was humbling, depressing and exhilarating - the band were fantastic - Roddy Frame was on guitar and I can safely say it was the most astonishing and impressive guitar playing I have ever seen and heard - he was supporting his mate Edwyn along with the rest of the band and they felt like a real gang looking after their mate. Many of the best bands are like gangs, from The Clash to The Stone Roses, and Edwyn's band exuded that. It was the most supportive, life affirming event in many ways but tinged with sadness, thoughts of mortality etc, and of course my dear old dad who was a star, though not a fan of Orange Juice it must be said.
For aficianados, you can get the whole set list elsewhere through the Edwyn forums but suffice to say the first three songs were Falling and Laughing, Poor Old Soul and What Prescence and Blue Boy appeared in the encore . What can I say apart from that many old timers like me went away simply thrilled, honey. The Times ran a review that was similarly upbeat. Still heroic, just in a different way.
Posted by Guy Osborn at 12:27 No comments: