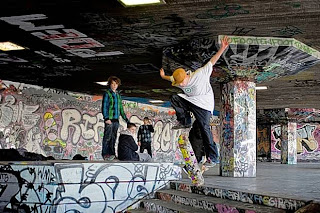 On the way to an (excellent) Arts and Humanities Research Council event in Edinburgh entitled Connected Communities I started to think a little more about notions of community and how the law engages with the issue. It occurred to me that the law often has an input in terms of how we construe this and that perhaps this is often overlooked.  Whilst thinking about this, the names of Ray Davies and Lord Denning, names not often uttered in the same sentence, at least outside of my house, came to mind. This may sound tangential, particularly in a ‘legal’ blog, so let me explain…

Ray Davies, lead singer and chief songwriter of The Kinks, is of perhaps best known for the song Waterloo Sunset, to my mind the song against which all pop songs should be judged. This tale of Terry and Julie (was it Terrence Stamp and Julie Christie? We will perhaps never know) has become part of pop music folklore, and gives its name to the glass pavilion, designed by Dan Graham, that sits next to the Hayward Gallery on London’s Southbank. Recent developments at the Southbank however bring to mind another of Ray Davies’ celebrated works: The Kinks are the Village Green Preservation Society. This was a concept album, a homage to English culture and everyday life, focused around the simple pleasures of the Village Green. Coming back to the law for a moment, Lord Denning also extolled the virtues of the Village Green. In the landmark case of Miller v Jackson for example, a case involving the intersection of recreational cricket with the torts of negligence and nuisance, Denning waxed lyrical on the social utility of sports that were played upon it, and celebrated what the Village Green denoted – the place around which the life and soul of the community revolved.

Recent developments have placed these issues in sharp relief. As part of the redevelopment of the Southbank, there are plans to remove the site known as The Undercroft, a haven for skateboarders, BMX bikers and graffiti artists for many years, and replace this with retail units. This has resulted in the Long Live Southbank Campaign lodging an application to have the facility registered as a community space under legislation designed to protect village greens. Using the Commons Act 2006 lawyers acting for the campaign are to argue that it is a space where ‘a significant number of inhabitants….have indulged in lawful sports and pastimes on the land …for at least 20 years’ . At first glance this seems odd, there appears to be very little of the archetypal village green in evidence at the Undercroft, but, in fact, beyond the archetype, what the space provides is exactly that, a community place focused around a cultural practice. The campaign takes comfort in the recent decision of the Court of Appeal in Newhaven v East Sussex County Council where a beach was held to be capable of being classed as a village green, notwithstanding that its characteristics were very different from the traditional pastoral vision of the village green. However, there may be other storm clouds on the horizon – the Growth and Infrastucture Act recently received royal assent and it remains to be seen how this will affect attempts to register places in this way – certainly developers see the new Act as a welcome counterbalance to the previous legislation. As regards the Undercroft, as of 4th July it appears that the planning process is being pushed back as a response to the campaign, but in the longer run, whether the law can protect this important cultural and social space remains to be seen.

This post originally appeared, without links, on the Young Lawyer blog.