Doctor Who? Doctor Pavoni. The PhD as journey

Yesterday I sat in, as Director of Studies, on the viva of my PhD student Andrea Pavoni. Andrea gave a masterful defence of his thesis, 'Exceptional Tunings: Controlling Urban Events', and the examiners were impressed with the richness and inventiveness of his thesis - something that came as no surprise to myself and the rest of the supervisory team.

It made me reflect on the whole process of the PhD, the roles of the various parties, the expectations, and also the changes that we are starting to see more recently in its organisation and approach. More close to home, I reflected on the journey Andrea himself had undertaken. When Andrea applied for the PhD programme at the University of Westminster Law School it was as part of the Vice Chancellor's research initiative in 2009, where up to 20 studentships were to be created  to encourage interdisciplinary work across the various parts of the University, and to which members of staff had to 'bid' projects to be put forward for support. From our Centre we put in two bids, one involving 'the regulation of mediumship' in conjunction with Annette Hill (then from our Media and Design Faculty, now Professor of Media in Lund), and one on 'mega-events, tickets and social inclusion'  (in conjunction with Dr Andrew Smith, Reader in the Faculty of Architecture and Built Environment). Whilst both projects were shortlisted as ones we could recruit to, we only recruited to the latter one, and Andrea was the successful candidate for this.

During the early stages of research it became apparent that Andrea's real interest lay beyond the original proposal and it was fascinating to see the project develop and evolve during the PhD. Thinking of this during the viva itself, it made me realise what a journey the PhD is and also that to a large extent that the PhD is a process, or as David Gauntlett said on his entry about how to survive a PhD on his blog, '... an exercise in showing you can do research'. Andrea's journey was a great example of this, and indeed for the whole team as the supervisory team adapts and changes to support the research. During his PhD, apart from an incredible amount of reading, thinking and writing, Andrea was selected to highlight the research of the University as part of the Graduate School launch, was successful in obtaining funding to do field work during World Cup 2010 in Johannesburg and was instrumental in organising a number of workshops and events, including Law and the Senses amongst other things. We were all very proud to see Andrea achieve his success yesterday, and it was great to reflect on the ebbs and flows, changes in direction and emphasis, and ultimately the final symbolic denouement in the examination room, of the research project and recognise, in the end, a piece of work which was original, ambitious and, indisputably and unarguably, his. Well done Dr Andrea Pavoni!

The Law of Dr Who

Next weekend sees the 50th anniversary episode of Doctor Who, The Day of the Doctor, described as 'a love letter to the fans' it promises sights of a number of previous Doctors and is much anticipated. This of course comes hot on the heels of the recent treasure trove find of lost episodes and also, from a personal perspective, reminded me of the time when I met the Third Doctor, John Pertwee at a book signing in Birmingham when I was around 6 years old and when Tom Baker (the Fourth Doctor), with K9 in tow, visited my school in the late 1970s. Unfortunately, I could find no corroborating evidence of this by searching on the web, although I did find some interesting footage of Tom Baker visiting Schools in Belfast around the same time and its great to see the reaction of the children.
Outside of this, the legal dimension of Dr Who has become more visible recently.  For a start, the news that the son of the writer of the very first episode is launching a legal action claiming ownership of the TARDIS adds to a line of cases where authors and designers have argued that they are the owners of various characters and other aspects of films such as Star Wars in the past.


Also, and closer to home, my colleague Professor Danny Nicol has recently issued a Call for Papers for a symposium on The Politics and Law of Dr Who which is looking like it will be an excellent event with lots of interest generated already. Danny is in the process of starting a blog on this too, so keep an eye on this too. This taps into a growing fascination for what areas such as film, television and literature can tell us about the law, and what law tells us about them, and Danny's interest in Dr Who is a welcome addition to this growing area.

Labels: Dr Who, Law and Popular Culture, University of Westminster

‘I don’t want to talk about it’: Virgin’s disruptive past

Recently I visited the Virgin Records exhibition ‘40 Years of Disruptions’ currently being held for a short time (blink and you will miss it – certainly by the time this blog is published it will be history) at the impressive Victoria House in Bloomsbury. Celebrating 40 years of Virgin Records, the exhibition covers much from the label’s back catalogue, including of course material based around Mike Oldfield’s Tubular Bells and a section celebrating the Spice Girls and Girl Power. I have to admit to some disappointment as I walked round that perhaps my favourite Virgin artist, the group XTC, were criminally overlooked  - although some digging around afterwards revealed there actually was some video footage of them in the Manor Recording studio shown that I unfortunately missed, although I have since found this on youtube, part one of which is here, and the rest are easily found.
Unsurprisingly, a large proportion of the exhibition is given over to the punk and post punk period, and in particular the work of the Sex Pistols. There are T-shirts from Vivienne Westwood’s shop Sex, assorted badges and some great examples of the work of Jamie Reid who provided the artistic backdrop for much of the Sex Pistols’ work. One example of this took centre stage at the exhibition, literally, in apop up recreation of the original Virgin Records shop, resplendent with bean bags and hundreds of copies of the Sex Pistols’ debut album ‘Never Mind the Bollocks’, and nothing else, on show. 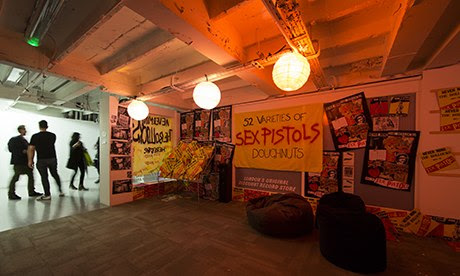 This is an allusion to a key ‘disruption’ in the Virgin Records story, and of the attempt to censor the album. The subject matter and lyrical content had already been deemed problematic with previous singles such as God Save the Queen subject to much approbation, released as it was to coincide with the Queen’s Silver Jubilee and contentiously denied the number one slot in the singles chart by Rod Stewart’s ‘I don’t want to talk about it’, despite allegedly outselling it. However, when Richard Branson instructed his shops to blitz their windows with a display based on the album sleeve and title, the police became very interested, threatening him with various charges including one under the Vagrancy Acts. Eventually one of the shop’s managers was arrested and charged under the arcane Indecent Advertisements Act 1889. Branson instructed John Mortimer QC to defend, and his arguments centred on calling a series of expert witnesses including an English professor to explain the etymology and meaning of the offending word, ‘bollocks’, and that it had in fact been used as a term of endearment used amongst clergymen, and won the case.
Whilst Never Mind the Bollocks gives a neat example of one form of attempted musical censorship, I was very taken with another different form, tucked away in a far corner of the exhibition, and involving a different type of professor. Here was a letter written by a young fan to Professor Green asking him very politely if he would consider refraining from swearing on future releases so that the boy’s father would allow him to purchase the Professor’s wares. It may not be the law, but there are lots of ways that access to music can be restricted, and access disrupted.