On Tuesday 5th March the excellent Daniel Geey is giving a lecture at the Westminster Law School as previously noted. Daniel is an extremely good speaker, an authority on all matters football and the law, and a genuinely nice man to boot! More on Daniel here.  Anyone external to the University of Westminster who want to attend, please email Sam King to confirm.

The address for the lecture is Room 2.05A, School of Law, University of Westminster, 4 Little Titchfield Street London W1W 7UW (nearest tube Oxford Circus) and the lecture will start at 5.00.
For anyone who cannot make it, we are delighted to be able to announce that the lecture is to be streamed live too, via this link.
Posted by Guy Osborn at 07:27 No comments:

The Young Lawyer and blog promiscuity

I have been a bit quiet on the Dispatches front recently. Lots of reasons for this, not least my increasing fascination with twitter and a number of other work issues. Also, I have been commissioned to contribute a monthly blog for the Solicitors Journal/Young Lawyer, and I have written a number of pieces for them so far on issues such as the social significance of sport and the regulation of ticket sales, and most recently, film classification. As noted in the blog, one of the outputs of this was a chapter Alex Sinclair and I contributed to a book to celebrate the BBFC centenary, which is, of course, available at all good stockists and well worth a read! If you don't believe me,if the link still works around 10 minutes in, see the review on BBC Two's The Book Review Show 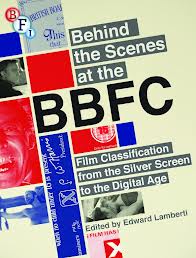 The entry below is reproduced from Young Lawyers Blog January 2013 with links added for your delectation. Please follow developments on the young lawyers blog
Despite enjoying a more positive perception than in some of the previous years running up to its centenary celebrations in November 2012, the British Board of Film Classification (BBFC) faces a number of challenges for the future. Not least among them, how they respond to the changing nature of both consumption of film and production, with new modes of delivery and creation introducing a host of new challenges. As such, 2013 – and indeed the next century – promises to be just as eventful as the last.
Towards the end of 2011 the BBFC was asked to classify the film The Human Centipede 2. This was initially rejected, but following a resubmission of an edited version that had 32 separate cuts, removing two minutes and 37 seconds from the original submission, the film was finally classified as an 18. This was well publicised across the popular press, but was only the latest in a long line of celebrated cases, many of which were highlighted in Uncut, the British Film Institute’s exhibition and film series, held to mark the BBFC centenary. During Uncut some classic examples were shown, for example the rare complete version of John Waters’ Pink Flamingos was shown, as was the original uncut version of Spielberg’s Indiana Jones and the Temple of Doom.
All of the films illustrate the combination of elements that dictate how the BBFC go about their business, and frame their approach to classifying film. The BBFC has always been cognisant of the legal framework within which it operates. Indeed, the BBFC is a curious bi-product of the Cinematograph Act 1909 that dictated that premises needed to be licensed to show films, but since then a number of key statutes have further impacted upon how films are classified including the Obscene Publications Act 1959, Public Order Act 1986 and the Video Recordings Act 1984. It is instructive that until recently they were known as censors, only becoming the British Board of Film Classification in 1984.
The portrayal of children in film has become increasingly contentious, and the Protection of Children Act 1978 has had a significant impact on the way that films are classified. The law, however, as often is the case, is only half the story. While there is a broader legal framework within which they operate, the BBFC adopt their own guidelines that further inform the approach their classifiers take to film. Their approach today is an interesting one as while all the examiners will be aware of the legal framework, and will not allow anything to be granted a certificate if it potentially falls foul of this, the BBFC’s own guidelines will dictate the film’s location on the core spectrum of U, PG, 12, 12A, 15 and 18 and these guidelines are regularly reviewed and updated. The film critic Mark Kermode has talked of a sea change in their approach in recent years, with the BBFC cast as protector of film rather than the enemy that many saw them as years ago.
A number of events took place to celebrate the BBFC’s centenary in November last year. A book, entitled Behind the Scenes at the BBFC: Film Classification from the Silver Screen to the Digital Age, to which my colleague, Alex Sinclair, and I contributed, develops some of the themes I have touched on here.
Posted by Guy Osborn at 02:09 No comments: