It starts and ends with you

This entry is something of a digression for Tickets of Distinction. Hitherto, and very sporadically, I have posted blogs concerning tickets on anniversaries of the original event, and tried whilst doing this to excavate some social or personal history of the time.  I haven't managed to post as much as I would have liked given these parameters, but a gig last week made me realise that there were other possibilities for the blog.

Last week I saw Suede at the 02 Academy in Leeds. I have no ticketing proof as, as is often the case today, tickets are not the artefacts they once were. Sometimes digital on a phone (such as Dice), sometimes a code and your name on a list (wegottickets), there are myriad ways in which we get access to events these days.  Although physical tickets do sometimes exist they are often now anodyne and functional. I was in Leeds to examine a PhD and looked at the listings and saw Suede were playing, I had a night in a hotel booked, so why not? Suede were a revelation. Celebratory, participative and still really important. This actually should not have surprised me.

I first saw Suede almost 27 years ago this month. Suede were third on the bill to Kingmaker that night - I had missed out on tickets for the Africa Centre and was desperate to catch them live having heard great things about them. I had always maintained that I saw them on the day The Drowners was released, but closer inspection of the ticket shows the gig was on a thursday and singles were always released on mondays back then. Also wikipedia and suede fan sites make it easy to find out these dates now and it appears The Drowners was unleashed the week before so I would have had time to play this pearl of a single to death before the gig. Like The Smiths before them, and to whom they were often  compared, the b sides were similarly fantastic. I wouldn't have known the whole repertoire at this point so this would have been the first time I would have heard much that was to comprise the debut album. Unless you saw any band a number of times there's no way the average punter would learn much about the songs in those pre internet days - the only time I really experienced knowing just about all the songs BEFORE the album came out was with The Stone Roses, see a previous Tickets of Distinction for my stories of that. Coincidentally whilst writing this blog my twitter feed showed that The Stone Roses was released 30 years ago this very day...


My second time seeing Suede was later in 1992 at the SW1 club in Victoria, I'd never been before, and apparently was quite a well known club venue but that night was draped in red velvet  and looked very suede. The Auteurs supported and were superb. After that there was a cancelled gig at the Kilburn National, that re-appeared as a gig at the Brixton Academy in May 1993. This is notable for at least two reasons, first, the performance is immortalised in Love and Poison. Secondly, Allison my partner was six months pregnant and my soon to be born daughter, Keir, was doing cartwheels and we like to think of it as her first gig. I missed out on the chance of the My Insatiable One flexi disc as the queue was goo big and we had to get home - most unlike me.

Later that month I was due to fly to the US for my first academic conference, the conference was taking place in Chicago but along with my colleague Steve Greenfield, we were able to arrange a trip to NYC whilst over there. This was largely sorted by the late, great Martin E Silfen, and we interviewed a number of well known entertainment lawyers in Manhattan which made it quite a trip. Whilst in the office with Marty we mentioned that we were hoping to go to Suede that night at the Irving Plaza but that it had sold out. 'Hey Janna - suede - they're one of ours aren't they?'  he shouted across the office and we managed to get hold of one ticket and the advice that if we hung around long enough and spoke loudly enough outside in our English accents we would both get in. Marty's advice was correct, although it was Steve's George Best t shirt which swung the deal.

We loved it of course, and it seemed wildly exotic to be on the guest list for the hottest band in the UK on their first US tour. Apparently a number of the crowd weren't keen on the choice of opening number (The Next Life) whilst we saw it as a bold subversion. 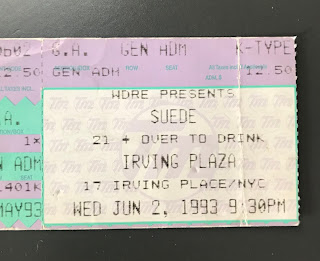 There followed a few years when I didn't see them so much, I still bought, and loved, Coming Up, and there was a memorable trip to the Brighton Centre to see them around the millenium, but perhaps the next time I saw Brett & Bernard it was as The Tears post the Suede split. Refugees was splendid of course, but overall it was a little underwhelming. Before Leeds the last Suede show I saw was the excellent Dog Man Star show at Brixton, I have no ticket evidence for this as the remarkable Bill Marshall had sorted out the guest list.

On the train up to Leeds I spotted a tweet from someone I've never met but via twitter have discovered is a fellow veteran of Roses' gigs at the LSE and elsewhere. He tipped me off that Brett's Coal Black Mornings was on sale for £3 in a discount book store. I had neglected to buy this although it was on my 'to do' list so picked up 2 copies. The first I gave away to a fan at the Leeds gig, the second I bought the next morning to replace it. The reviews are right - its a fabulous and brave read. I've not finished it yet but its a lovely and tender take on the early part of Brett's life, before the madness really kicked in. He writes beautifully on Justine too. But something that Luke Turner wrote  in the Quietus....about Suede's audience struck me too - he talks of 'the profound relationship Suede have with their audience, a shared energy, a sense of love'. Simon Price has noticed this too,  and their kinship with the Manics in this sense, and also a sense of a new generation also 'getting it' too. Whilst around me at the 02 Academy were lots of people my age, at other points and in other spaces a younger group  were also drawn in.  Quite something 27 years on.

I have recently started a blog, the info you provide on this site has helped me greatly. Thanks for all of your time & work. culture