Reasons to be thankful - Part 1

I recently became aware of the phrase  'thankful villages', and was surprised the concept had previously passed me by. Its a really evocative concept and phrase, apparently coined by the journalist Arthur Mee, to denote villages in England and Wales from which all members of the armed forces returned during World War One. I became aware of them via some work Darren Hayman is currently undertaking. I love lots of Darren's work, and recently commissioned him to paint our dog Tilly who sadly passed away during 2014. and was really pleased with the result; 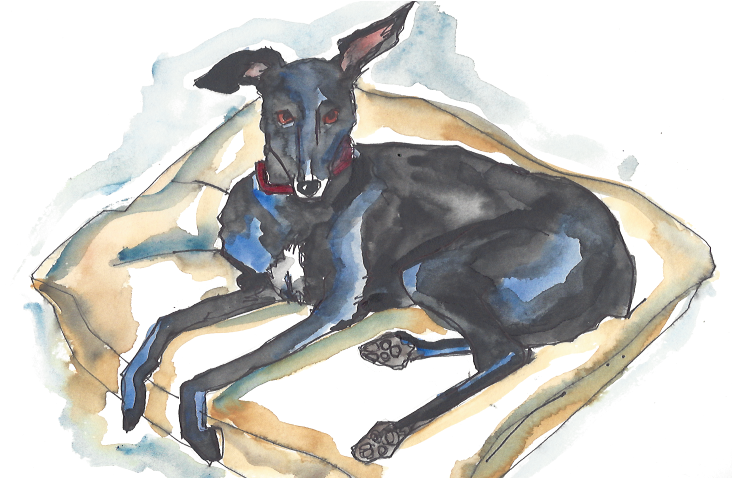 Darren has been visiting thankful villages and painting these too, and given the interest in World War One for members of our Centre, I did a bit of digging about these thankful, or blessed villages. Mee apparently originally identified 32 such villages in his book Enchanted Land, but some excellent detective work by Thorpe, Morris and Morgan on the Hellfire Corner website suggested in 2014 that there were in fact 54 such settlements. It appears in fact that many villages were not keen to draw attention to themselves in this way and kept a low profile, certainly some of the memorials are very low key. A piece by Christopher Middleton in the Telegraph notes the tension between celebrating survival and lamenting death, noting a very simple memorial in St Mary's Churchyard at Middleton on the Hill in Herefordshire - a lantern with an inscription including the following observation 'At evening, it shall be light'. You can see some of Darren's pictures of these Thankful Villages  if you follow him on twitter, and maybe try #ThankfulVillages as a search. As the various events and initiatives marking the Great War develop, certainly it seems these villages will become more high profile, notwithstanding the unease and ambivalence that sometimes exists about 'celebrating' them. We hope to run an event soon looking at the impact of World  War One on law and popular culture, and will post details here if we do. As a sort of precursor, we are showing the film Paths of Glory in February 2015 as part of our Film Matters series, and our Archivists have produced an excellent online exhibition of the Polytechnic and World War One (before becoming the University of Westminster, we were previously known as the Regent Street Polytechnic and Polytechnic of Central London amongst other guises).  Hopefully we will have more developments to report on soon, but in the meantime here is a short BBC video, and have a look at some of the links above.
Posted by Guy Osborn at 14:29