I have really enjoyed Letters of Note and its occasional tweets on often very poignant letters, in fact I liked it so much that I bought the book for my partner for Christmas. It got me thinking about my own personal treasure trove of oddities, the gig tickets I have collected over the years since my first foray into consuming live music at the age of 14, with the magnificent XTC, something that I have blogged about previously. The Letters of Note series got me thinking that maybe I should use these tickets in a similar sort of vein, and use them as a point of departure to discuss other issues related to the event, the date, the band, the venue, or something else completely unrelated. I would call this Tickets of Distinction, a name with its own indie reference points but partly a homage to the Letters of Note idea. So, this is the first in an occasional and irregular series of posts that will celebrate, or commemorate a gig from the past. Who knows, maybe one day it will be a book too. 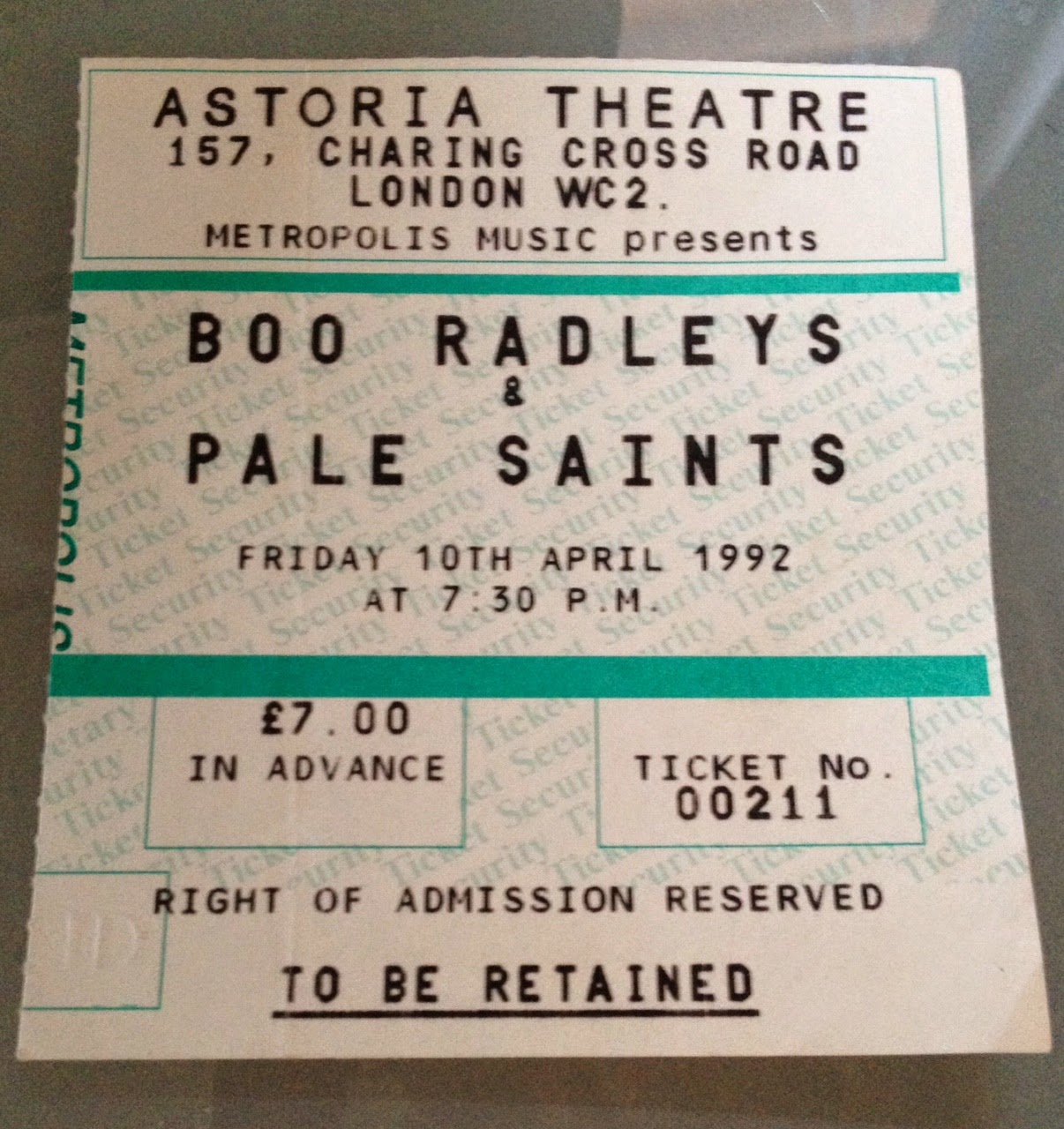 On 10 April 1992, 22 years ago today, Allison and I went along to see the Boo Radleys co-headlining with the Pale Saints at the Astoria on Charing Cross Road, now sadly razed to the ground to make way for the Crossrail project. To be honest the Astoria was never my favourite venue, although I have seen some notable gigs there over the years including Richey's last ever gig with the Manic Street Preachers (I'll save that for a post in December maybe!) and even some classics in the downstairs Astoria 2 which was a bit of a fire trap, but the Astoria was certainly an important venue, and central London now lacks a similar sized venue of its type. That day, both of these bands were broadly part of that indie/shoe-gazing scene that was later decimated by the onward roar of Britpop, currently celebrating its own 20th anniversary on BBC Radio 6, and of the two bands only the Boo Radleys achieved much success, later clinging as they did to the hem of Blur, Oasis, Pulp and the rest with their one hit Wake up Boo. The gig itself was enjoyable enough. I had liked Pale Saints, who came on first that night I think, since I first heard their 'Barging into the Presence of God EP', with stand out track The Sight of You. The band had formed at Leeds whilst I was at college there and the song was, allegedly, about a friend of a friend. I liked the The Boo Radleys album Everything's Alright Forever too, it had been critically lauded, although my thoughts that maybe it was an overlooked gem was not borne out by a listen via spotify as part of the research for this piece. 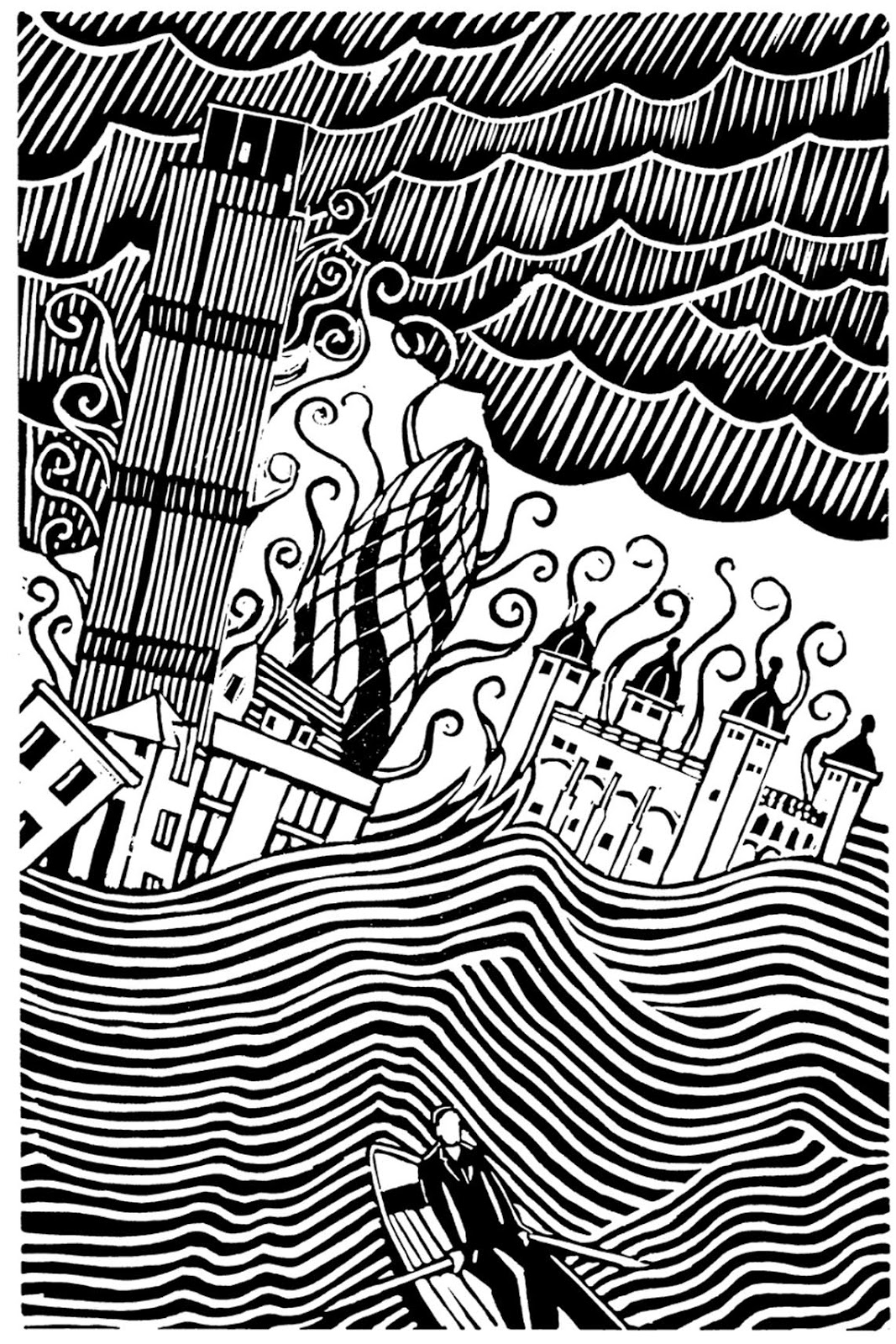 The gig was actually only memorable in that whilst we were in the venue, at 9.20, the Provisional IRA exploded a bomb at the Baltic Exchange, killing three people,  injuring 91 others. Elsewhere in London the effects of 45kg of Semtex were also felt, a friend in Clapton reported being knocked off her feet, but we left the venue, some two miles from the Baltic Exchange, in the days before instant media saturation and given the high noise levels inside the Astoria, blissfully unaware of the bombing until the next morning. The site of the Baltic Exchange is now host to the Swiss Re building, better known as the Gherkin and here depicted by Stanley Donwood in his Fleet Street Apocalypse series. Since that evening The Boo Radleys and Pale Saints have long gone their separate ways, the Astoria has been destroyed and the Good Friday Agreement has been signed. London's skyline has changed, and indeed London itself has changed. I'm still going to the gigs though so at least something has remained constant, and this occasional series of posts will catalogue, and celebrate, some of these outings. I have put this post here and also on a new dedicated blog, entitled Tickets of Distinction where these will appear from now on.